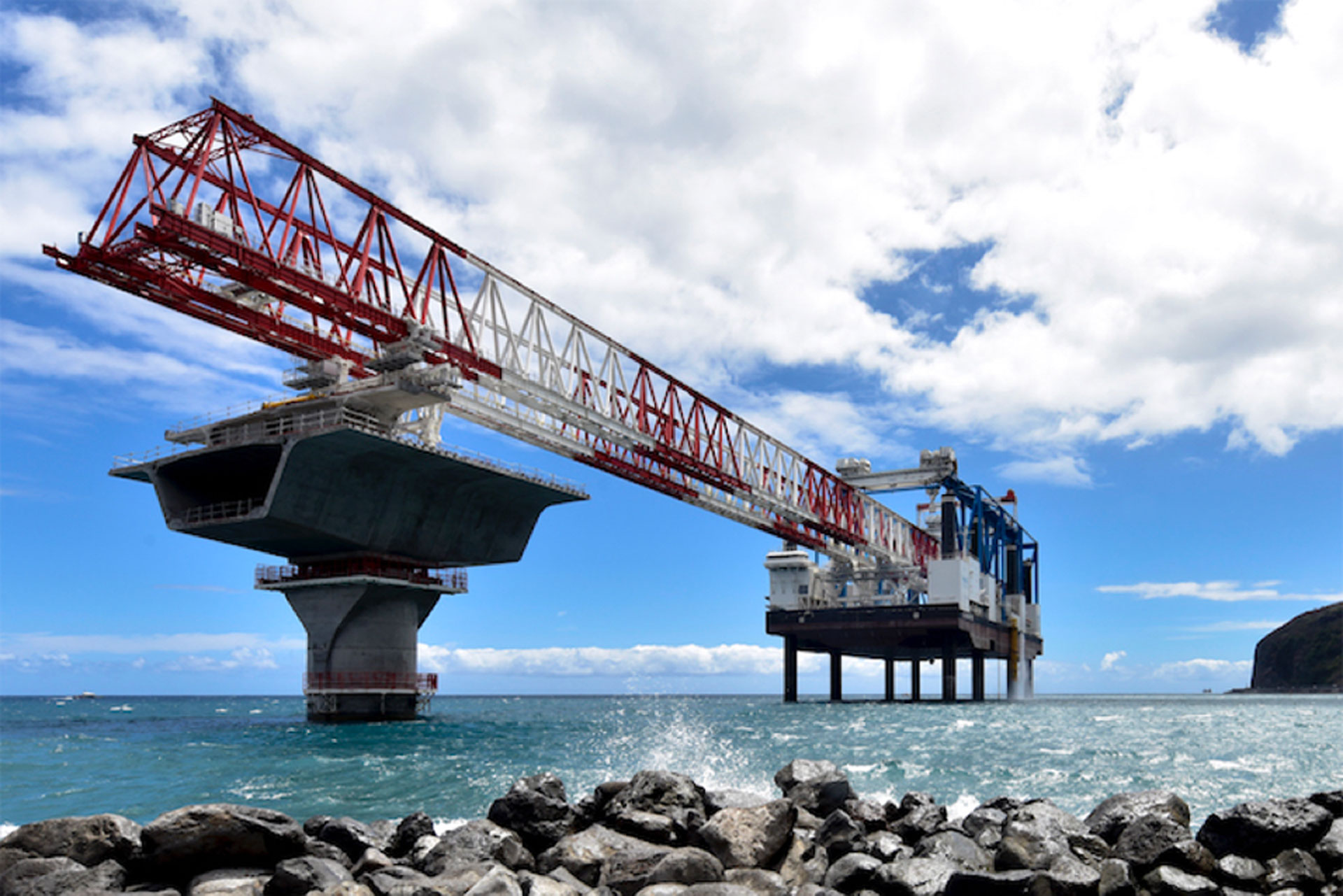 Designed to keep cars away from the risk of cliff rock falls and to withstand cyclonic swells, this sea viaduct runs along the coast for 5.4 kilometres between the north and west of Reunion Island.
Parallel to the coast, this bridge over the water is made up of seven successive decks of 769 metres each. An exceptional structure in terms of its characteristics and its maritime location, it is also exceptional in terms of the diversity of the tools and methods used to build it. 95% of the elements of the bridge were prefabricated on land in two prefabrication plants and then installed by sea or by launcher.
For offshore operations, a single mega barge was specially equipped for coastal navigation in difficult seas. It was fitted with two overhead cranes and a concrete plant, Zourite mobilised a team of experienced sailors to transport and place on the seabed the elements of the 48 piles of what is now the longest viaduct in French sea waters.
The pillars are composed by two parts, an upside down mushroom-like base and an upper part destined to support the spans, which is installed later. The sea bottom, on which the end of the pillars are placed, even if it has been prepared and leveled may result not perfectly flat and some protrusions can occur. For this reason also the connection with the upper part can be compromised.
This is where our cylinders come into play, they are positioned in special support  points on the superior part of the foot to allow to place vertically, and at the correct level, the upper part of the pillar. More specifically, there are 4 couples of single stage-ring nut spring return cylinders with tilt saddle, with a capacity of 900tons and a stroke of 150mm each. Each couple can be operated independently by an electronic device which, depending on the final position to be reached, acts the cylinders by following an isostatic scheme where the two couples are hydraulically connected to work in parallel and the other two couples constitute the two final points.
The system allows the synchronous lifting and lowering until a common height is reached corresponding to the cylinder, (or a group of cylinders)  lower for the lifting or higher for the lowering. Starting from this position the other groups of cylinders are brought to the final position. With the lock ring nuts brought to flush the cylinders have the goal to support the upper parts while the concrete is being poured, once the concrete becomes solid they are removed and ready to be used on the following pillar.