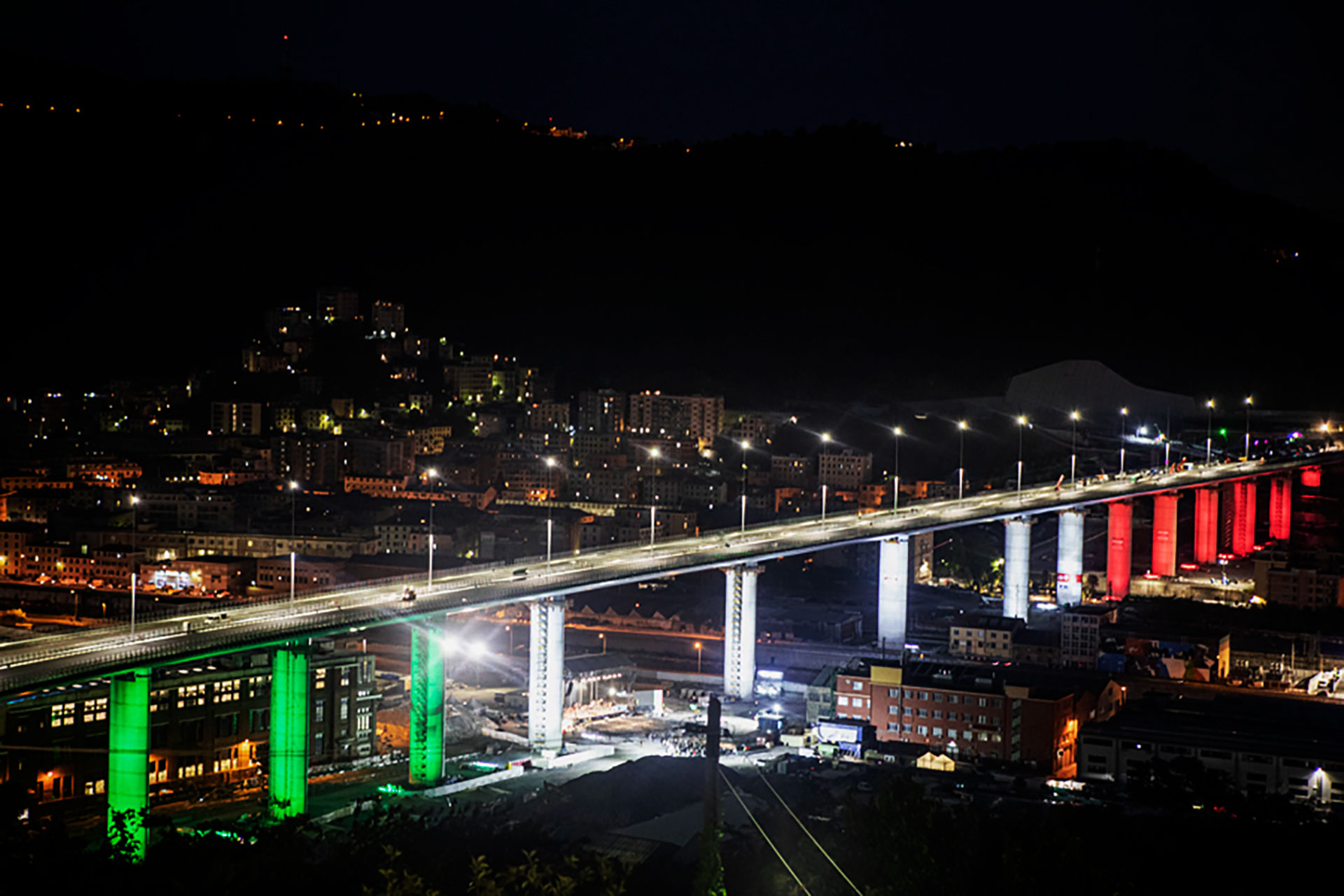 The importance of details

During the reconstruction work on the new Genoe- se Polcevera viaduct, a lot of small to medium-sized companies as well as large compa- nies have taken part in this project. Among the former the company Euro Press Pack Spa particularly stands out. This company is an Italian leader in the construction of high to very high pressure, traction and lifting hydrau- lic components and it was involved in the project from the very start. It ini- tially supplied the Vernazza Autogru company with equipment used du- ring the clearing and safety procedu- res following the collapse of the brid- ge. Then the Fincantieri infrastructure company who built the metallic fra- meworks, chose Euro Press Pack to supply the equipment necessary for the lifting and mounting operations of the new bridge. In fact, numerous hydraulic power packs and about one hundred high tonnage cylinders (100, 300 and 500 tonnes) supplied betwe- en September 2019 and February 2020, have been used in all the opera- tions related to the positioning of the bridge deck, the regulating and abo- ve all the lowering to the definitive level established by the project.

The launch of the viaduct was cha- racterised by two macro phases: the first which went from October 2019 to mid-May 2020 focused on the lifting operations during which the EPP cylinders played a fundamental role by supporting the positioning of the single bays on the structure. Howe- ver, it was during the second phase that the EPP cylinders became the hidden protagonists during the ma- noeuvring. In fact from mid-May the structure weighing 17,000 tonnes, was positioned at a higher level than established by the project in order to allow a series of operations during the assembly and was then lowered by 265 millimetres to be definitively positioned on the bases which con- nect the structure to the pillars be- low. During these manoeuvres the EPP cylinders (see picture) were en- capsulated in their metallic structures which allowed for the correct appli- cation of the necessary force to ma- noeuvre the structure in total safety. These operations required the use of more than 70 cylinders and their re- lative high-pressure working systems which were positioned on each stack and shoulder of the viaduct. Euro Press Pack has also been an impor- tant supplier to Spic Srl company which between January and March 2020 purchased different types of cylinders such as gravity return and spring return, hand-powered pumps and electric power packs to carry out the regulation of the carpentry ele- ments during the pre-assembly pha- ses of Bays SPA P1 and P9 – P10.

Euro Pass Pack proved its worth in July 2019 when it supplied a Geno- ese company of excellence, Vernaz- za Autogru in record time with hy- draulic sets with high tonnage and stroke cylinders to accompany their cranes and ballasts during weight tests requested by the Ministry of Infrastructures and Transport. This was carried out with the support of six Universities and various research bodies who used the collapse of the Alveo Vecchio Viaduct on the A16 motorway as a case study. This brid- ge, which was built in the sixties and no longer utilized, was submitted to weight tests bringing it to the point of collapse in order to study its tech- nical resistance and refine in the best way possible the techniques guaran- teeing infrastructure safety. The Minister of Infrastructure and Transport through the Territorial In- spection Office (UIT) in Rome and led by Engineer Placido Migliorino, with the help of Professors from the Universities of Trento, La Sapienza in Rome, Federico II Naples, the Polyte- chnic in Turin and the University of Chieti used these tests to compile ahandbook for motorway companies with clear and precise guidelines on the criteria to use when evaluating the safety of viaducts. The tests car- ried out on the A16 motorway have been used to verify the practices which motorway companies should adopt in order to monitor the state of health of infrastructures. The tests carried out on the Alveo Vec- chio viaduct, which are of great scien- tific interest and unique in this field, have meant that the actual behaviour of viaducts in critical situations du- ring use and collapse can be studied. Besides, important information can be gathered on safety standards, with particular reference to the investiga- tions into the measures which go- vern the resistance and durability of structures and can then be added to motorway company guidelines.